We have been talking about digital transformation for quite a while now. As CIOs, we should seize the opportunity to help our companies find new digital ways and thus find new growth paths. Our last venue, CORDA Campus, was therefore the ideal place to fuel the discussion once more. Their tech start-ups are impacting business models, sometimes even disrupting the competition. What can we learn from these entrepreneurs? Never stop innovating and disrupting yourselves, for starters. As one of the starters said: “Shut up and start-up”.

Should we still talk about digital transformation, one wonders. Digital technology was first introduced more than fifty years ago. It is about transformation, period. And it isn’t about updating technology either. It’s about upgrading your strategic thinking, it’s about changing existing or introducing new business models and services. It’s about seizing opportunities through technologies, transforming IT into becoming a value creator: not containing cost but creating outcomes. It’s about customer centricity. About being proactive towards your clients because the speed at which things are changing is tremendous. “Accelerated transformation is becoming the business as usual”, Filip Cannaerts, partner at inno.com, concludes. 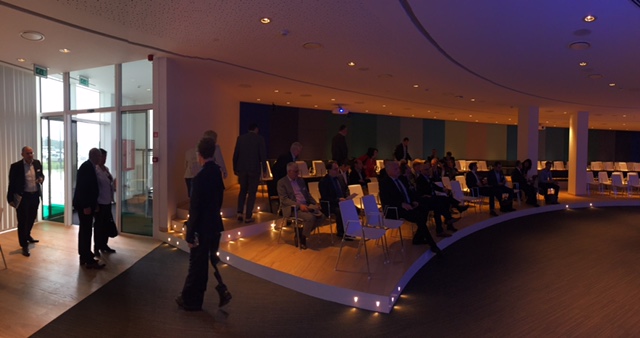 But how to get started? How do you drive this innovation? According to Belfius’ CIO Geert Van Hove, it is their enterprise architecture that helps them to steer in the right direction. “It is a tool that allows you to put the finger on the gaps in your portfolio and also shift budgets away from superfluous projects. We now take the right decisions at the right time, for an accelerated transformation to become a digital bank.”

As a result of a massive increase in mobile and web connections, Belfius will have a lot of valuable customer data. If it can connect this data with information from leisure and retail behaviour, the bank may find new business models in the analytics. Belfius has invested in strategic partnerships to make this happen.

The bank for instance implemented NGData’s next-generation analytics solution, a tool that will centralize real-time data of customers. And Inventive Designers enables Belfius to communicate in a proactive and personalized manner with its customers. Finally, as a result of a collaboration with Proximus, Belfius is rolling out fibre in every branch, so that appointments can take place via video conferencing.

However, the biggest strategic partnership of the new digitizing bank is the creation of a Fintech studio with the advisory firm Accenture. “We need to think ahead, and become a digital bank”, Geert Van hove explains. “Because our competitors are not only the big four, but the start-ups between us and our customers. Belfius is therefore investing in fintech, in robotics and also in other technologies. And everything we develop is mobile first. If we don’t we would remain a traditional bank..”

The digital football club is driven by data too

At RSC Anderlecht, they have the ambition to become a digital club too. Fans now look at a club differently. They want statistics, numbers, data. Why does a club need to sell or buy a player? “We used to have a good story based on good storytelling. Now we have a good story based on good data”, said Bert Van der Auwera of RSCA. The clubs need technology to build a fan experience: e-commerce for online ticketing, connected stadium technology for ordering refreshments online, for choosing a specific camera for replays. There might be business model in it, too.

A connected stadium creates another fan experience, but not necessarily less emotion.

Gathering the right data was not an easy task for RSCA. The personal data of fans, medical data of players and financial data of the club were spread across the organisation. The club brought down the walls and created a company with shared goals, analysed by centralised data. One of the first transformation projects was the introduction of a warehousing system for sports equipment, a first in Europe. The club also introduced measuring devices that give valuable insights into the preparation of the players.

Preparing for the company you will become

Digital transformation is a continuous trajectory. It's never done.
“We certainly don’t jump on every hype”, Van der Auwera says. “The tools of the past aren’t necessarily bad as such. But we will be ready by the time we move to a new stadium. Our competitors aren’t other football teams, but large entertainment companies. So we’re preparing ourselves for the company we need to be. We’re not doing IT for the company we were a season ago. Digital transformation is a continuous trajectory. It’s never done.”

Over 60% of the companies are just getting started with digital transformation. A company that fought disruption is HPE. In 2012, the tech giant was being disrupted by the smaller software-as-a-service vendors. It diagnosed itself and found out it was too big and without focus. The corporation was too busy acquiring companies, wasn’t able to accelerate. They decided to transform, and the ‘Make it Bigger’ project resulted in the split of HP Inc. and HPE. Read more about their separation and transformation project in this article.

Over 60% of the companies are just getting started with digital transformation.

Learning from lean and agile start-ups

Still, mergers and acquisitions can certainly be part of a continued innovation strategy. “There other options to drive innovation. You can also partner or invest in start-ups”, says Patrick Kestens of Corda INCubator on the CORDA Campus.

CORDA Campus is not a business centre. It offers starters the tools for co-creation, collaboration, networking, partners that help them on their growth path. “They are learning from larger companies. Corda is creating business communities that you can perfectly for internal innovation purposes. Because you can learn from our start-ups just as well.”

For this reason, HPE has restructured its HP Labs. Ramon Baez, former Global CIO: “We were doing unnecessary things. We subsequently created ‘infinity groups’ with IT, business and R&D. Research and design teams now focus on the right developments and they get us ready for the next level. Your internal strategic partners are just as important as the external partners. Our infinity group model allows us to constantly innovate.”

Never stop innovating and disrupting yourselves, as we already said above. At Corda, they Experiment, Fail, Learn and Repeat. Radical innovation requires a different mindset than an organisation focused on continuity, stability and first time right. Some call for digital platforms, other call it an expected evolution of IT. As IT leaders, it is our responsibility to help our companies to adapt to a new reality.

Corda INCubator is just 18 months old, but already has 83 start-ups in its portfolio, even if some have already left the incubaton phase. Corda INCubator guides them from idea to growth, helps them to accelerate, to go abroad, to grow into a scale-up and stand on their own. These are the impressive start-ups that presented themselves during our Special CIO Speakers’ café ‘THE CIO AS ENTREPRENEUR’. Quite a few ideas for entrepreneurship you can and should grasp. “Shut up and start-up!”

Hifluence is a digital transformation consultancy firm that was created just 15 months ago. The digital innovation factory helps organisations with their transformation projects and advises them to introduce the right strategies, tooling, culture and mindset to become innovative companies. They work for IT departments of large corporations to help them in their innovation tracks, and for SMEs that have the ideas but not the required digital platform to execute them. The start-up also has the manpower to put the strategies into practice.

Ticto has developed visual authentication authorization for access control which it believes is efficient. If somebody slips through gates behind someone, people almost never wonder if he or she is authorized to enter a building. Ticto’s digital badge will light up if you’re authorized to enter. Its four founders created the start-up in September 2015. Ticto has already collected 3.5 million euros in funding and is now testing its product at Dropbox’ HQ, with Nike and, closer to home, the Chancellery. It is still looking for testing candidates.

Airobot found a business model in the drones market. It produced camera technology and proximity sensors to attach to a drone. It allows them to perform technical inspections at great height: wind mills, power houses and so on. The drone maker is already partnering with Airobot to integrate their electronics in its models.

Bringme started five years ago as a spin-off of real estate company Ertzberg. The scale-up created Bringme Boxes for the private market so that people can receive e-commerce and other packages whilst being away from home. Communication between shop, delivery company and customer is done via Bringme’s app that is projected to have a use base of 400,000 users by the end of 2016. Bringme has already shifted focus to large environments like hospitals, schools and corporations, where reception desks are submerged with ‘private’ package deliveries. In 2014 Bringme employed 17 staff, today it has 75 collaborators.

Aroundmedia was founded about a year ago to allow better visualisations of real estate properties. The founders developed a tool with which real estate agents can easily make 360° presentations of apartments, houses or offices. It takes fifteen minutes and is ready to share. Candidates request less physical visits, which increases profit margin for the agencies. Aroundmedia commercialized its product and platform in February 2016 in three countries: Belgium, Spain and Switzerland. It is now investigating cross-sector applications, in airlines for instance.

Smartspoken developed a speech recognition technology that also sends queries to any given dataset. The software understands questions or commands, so that you can ask your data what you want to see or know. It is natural language search for databases, websites or analytics software, replacing point and click.

Flavr is a platform for chefs that want to make extra money, by selling home-cooked meals to a community of buyers. Flavr already welcomed 100 chefs on its platform. They’ve cooked 1700 meals for 600 customers so far, earning around 10,000 euros. Flavr is a classic exmaple of lean start-up. “Shut up and start-up. Done is better than perfect”, said its founder.

Small Teaser publishes digital magazines that are written by contributors around the world. Everyone can add content and ad revenues are shared amongst the community. The very first magazine was written by 100 contributors and there was a recurring revenue of 5,000 euros per month. With the help of Corda INCubator and funding by LRM, Small Teaser has officially launched in March 2016 and already has 150 magazines on its publishing platform. The idea is to grow to about 500 digital magazines by the end of 2016.

Cr3do wants to introduce small and medium enterprises to 3D printing. Their platform converts sketches or 2D designs into 3D designs, which are required for 3D printers. The platform evaluates the assignment and dispatches to a community of students, freelance designers and development agencies. Once the design is ready, it is sent to the print shop and the provider sends the result to the customer. Cr3do started in November 2015 with three partners. In seven months’ time, they’ve grown into a team of eight collaborators and are still looking for additional staff to support their growth.